A Hiker's Thoughts Before A Big Trip

Peter Diller was a camper at Woodcraft for many years. He started in Outpost, moved up through Iroquois Village and Ranger Post, and won the Chief’s Knife as a Trail Camper in 2012. The following year Peter participated in the Outdoor Leadership Training Division program and returned as a junior counselor in 2014. This journal entry and those to follow detail how his time spent at Woodcraft helped provide him the necessary experience to embark on a solo excursion in Olympic National Park.

This summer, for the first time in a decade, I did not drive down Rondaxe Road, did not eat the Opening Day cookies in the Dining Hall, did not put on a life jacket in the water in order to earn that precious green tag. I spent June and the first half of July scooping ice cream. Yes, I know. It’s a decidedly less noble calling than the time honored and sacred loco parental duties of a camp counselor. Instead of imparting life lessons upon the youth of the world I served them cookies n’ cream. Instead of following Michelle Obama’s fitness vision and leading young ones atop mountains and across lakes, woods, and soccer fields, I made them milkshakes.

It was for a good cause, however. I was saving money to fund a two-week solo backpacking trip into the wilds of Olympic National Park. The Olympics are a cluster of mountains that stand on the northwestern edge of Washington State. They cannot be classified as a range per-say, as they are jumbled and separated by deep river valleys. Smaller mountain ranges make up the Olympics, separated by gorges and stretching up to an elevation of 8,000 feet. The park fills the Olympic Peninsula like a balloon fills a box. Towns cling to edges, stuck between the park and the Puget Sound in the East, the Pacific in the West, or the Strait of Juan de Fuca in the North. Highway 101 warmly wraps itself around the park’s circumference, but no roads penetrate it deeply.

Why, you may be wondering, have I chosen this particular circle of wilderness? It is 3000 miles away from my house. Should I not have chosen something closer to home? My grandparents, I’m sure, cannot fathom why I didn’t simply drag a tent onto the six train and spend a few nights camping in Central Park. The woods are the woods, after all. And there’s some truth to this sentiment. I have trouble answering the question of “why there?” The best answer is probably “because of my parents;” an answer that applies to oh so many questions in life. My parents had hiked in the region way back in the day and recommended it to me. They had the topo-maps stored in the basement. The pictures of the area were nice. So Olympic National Park it was.

Why, you may be wondering, anywhere? An equally insightful question and one that is even harder to answer. There was no epiphany moment, no cry of “Eureka! I want to eat gorp for two weeks!” I spent lots of time on the trail considering why I had chosen to venture forth into the forest. “Because of my parents” doesn’t quite cut it in this case, although there’s once again a certain truth there. My parents, who dragged me up Adirondack High Peaks before I took my first standardized test. My parents, who brought me on camping trips and let me examine bear poop with a magnifying glass. My parents, who signed me up for a remote summer camp that lacked electricity in its cabins [Editor’s note: The boy’s cabins have electricity now].

Camp played a huge role in the trip, despite my decidedly lackluster AWC wilderness credentials. My favorite part of OLS was roasting marshmallows. I never did my solo overnight trip. I never earned my Pioneer. In Nature, I would scribble pictures of toilet-plants instead of identifying paw prints. I never retained what significance a circumnimbus cloud has (is that even a cloud?) [Editor’s note: No.]  On trips I fared no better. I was the slowest hiker, designated to the front of the line so that others did not leave me in the dust. When I sterned the canoe I would run it aground and swerve into rocks, a fact that Henry U., my unfortunate bowman, can readily attest to.

What I learned at Woodcraft runs deeper than birdcall identification though. The summers by 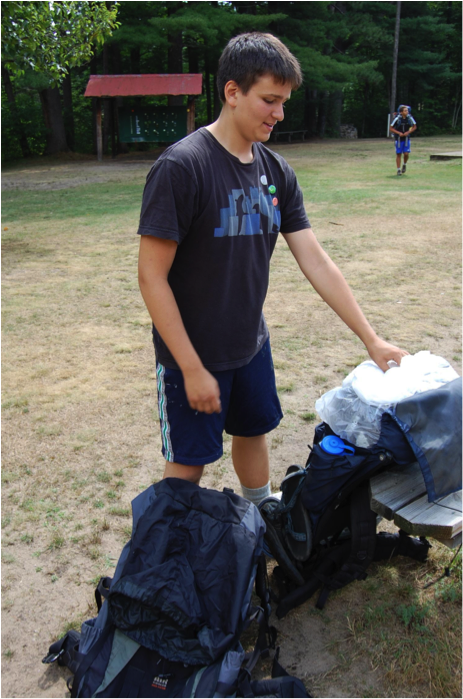 Kan-Ac-To built two crucial pillars that hold up my relationship to the natural world: comfort and common sense. Because of camp, I have seen countless snakes, been bitten by countless bugs, crossed countless rivers and slept on countless roots. Because of camp, I’m used to a strict diet of oatmeal and gorp, I’m used to the cracks of twigs in the still night and (parents cover your eyes!) I’m used to pooping off of logs. Nothing in the Olympics could or did faze me. Camp taught me common outdoor sense. How to correctly pack a bag, how to read a topographic map, how to light a stove. Never whittle backwards! Never pee near a body of water! Heaviest things in the bottom of the pack! Waterproof everything! Never run away from a bear! These were my religious commandments in July and August, these were the codes of life that I lived and breathed.

My interest in the wild has multiple tributaries – coffee table books containing glossy landscapes, novels in which the forest is a focal point for action and adventure, movies starring woodland creatures and talking trees. But it was through Woodcraft that this interest was validated. I initially liked the concept of the backpacking and I came to like the actuality of backpacking as well. I may have been the slowest hiker, but I loved the feeling of scaling Gothics, of devouring miles on the trail and then devouring trail pizza at the campsite. I wanted to go hiking for two weeks because I like hiking.

Photos - Top: Peter in 2012 posing with his recently-won Chief’s Knife. Bottom: Peter preparing for a trip at Woodcraft.

You must be logged in to leave a reply. Login »