A long-time Woodcraft camper and current counselor, Aaron Miska recently completed his summer 46 in the Adirondack High Peaks. This winter he began tackling the mountains in the winter. Today he is appearing as a guest blogger to recount his experience climbing Phelps Mountain.

The days leading up to the hike had been below zero for much of the time. At one point on Cascade Mountain there was a wind chill that reached -40. By Saturday, however, the temperature was in the mid-teens and 1 – 4 inches of snow were in the forecast.

The Outing Club at St. Lawrence University sponsors trips throughout the year including Peak Weekend in the fall and frequent trips to nearby Whiteface Mountain – also a High Peak – during ski season. For this trip I would be hiking with Macky, a junior who has completed her 46er twice, and like me is an aspiring winter 46er. Conner also joined us. He is a senior who was hiking his first winter peak.

Phelps itself is a simple hike with a well-established trail to follow, even when covered in snow and ice. Starting at the ADK Loj it is roughly 8 miles roundtrip, passing by the soon-to-be demolished remnants of Marcy Dam. The route then follows the Von Hovenberg ski/hiking trail for a little until the turnoff for Phelps. 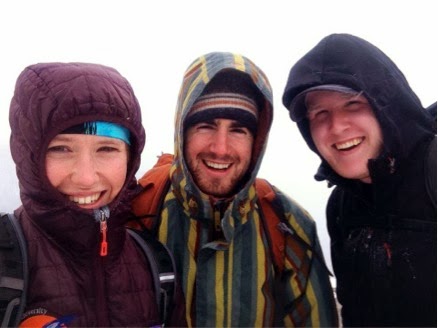 We started out around 10:00 in the morning with temperatures in the mid-teens and significant cloud cover. During the winter, traction on the trails is extremely difficult without proper gear. All three of us were using micro-spikes, which were attached to the bottom of our boots. I had my snowshoes in my pack, in the event that the snow became too deep, but I never needed them in the end. In my pack I also had an extra pair of gloves, a beanie, my heavy winter coat and my raincoat that would act as my hard shell if need be. In the winter, having dry clothes to put on can not just improve your experience but also be a life saver in the event that you get lost, wet, or are forced to stay out longer than you anticipated.

Our hike to the top was relatively uneventful. Except for passing by a few other parties, we had the trails to ourselves. As we neared the top of Phelps, the wind began to pick up, blasting us with what was likely a negative windchill at every exposed part of the trail. Once at the top we were greeted with almost no view of Tabletop or Marcy, and the wind had even blown the rocky outcrop completely clear of snow and ice. We took shelter just beyond the summit to eat a quick lunch. Heading back over the summit the wind was horrendous, making it difficult to walk and see, which is saying something because I am a big person. Slowly, as we retreated down the mountain, the wind declined and we were able to enjoy the fresh snow on the trail that allowed us to reach Marcy Dam in less than an hour.

All in all, the trip was everything I was hoping for: I got my second winter High Peak and I got to do it with people who shared a similar goal.

You must be logged in to leave a reply. Login »