Final Thoughts on the Big Trip

Hiking is an Old Man’s Game

Ah, the Olympics – the unofficial capital of elderly hikers. I saw, at most, around five people on the trails everyday and, as a rule, four of those people would be above the age of sixty. Some were impressed with my youth, while others cast dubious glances at my brand new Osprey pack and my high-tech GPS that would occasionally bleep with a message from mom (“Be safe sweetie! Xoxo”).

Somewhat worryingly this trend even applied to the rangers I ran into on the trail. Both were Vietnam veterans, one had legs that were shockingly tiny and seemed in no way able to hold up his Santa Clause-esque belly. The rangers, who I met separately, were both warm and treated me with grandfatherly kindness – but could they carry me out on a stretcher if I broke my leg? 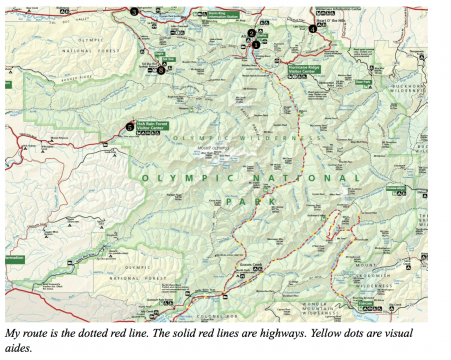 Could they see a cougar stealthily crawling down a mountainside?  For that matter, could they even see the mountainside? Where were the attractive, fit, backpackers who so often passed me by as I huffed up an Adirondack peak? Where were the cheerful camp groups, the carousing cry of the youth? When did hiking – like opera or golf – become and Old Man’s game? And, more importantly, why did I not get the memo? 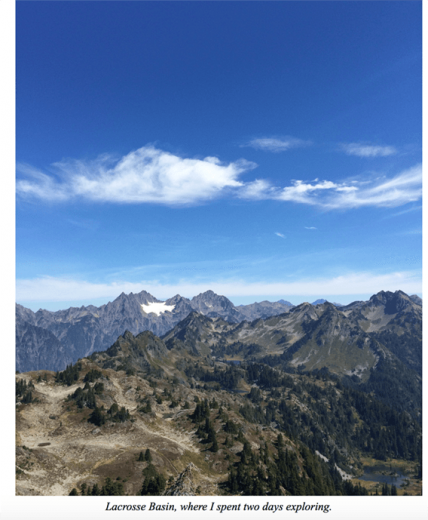 is crystal clear. I’ve always been somewhat put off by the tea-stained Adirondack lakes.

Let me assure you - clear water is much, much worse. The bottom of the lake was clearly visible at depths that must have approached seventy feet, if not deeper. Fallen trees were arrayed among boulders, and I dangled in terror at the surface, frantically looking for signs of movement in the water below me. The sea-monster population of a tiny glacier lake is in all likelihood zero, but the clearness of the water must have shocked me back into Outpost, because I swam right back to shore after mistaking a tree trunk for something more reptilian.

In my eleven days on the trail I entered a silent bizarro-world. The experience was at once both alien and familiar. Much of the joy of hiking comes from being with others - s’mores, scary stories, complaining, rejoicing. But there were upshots to solo-hiking, however. I took breaks whenever I wanted to, I pushed myself only as hard as I felt necessary, and I never had to debate over which trail was better to take.

I fully intend to hike by myself again, but I also hope to hit the trails with a half dozen twelve year olds in my care at some point in the future.